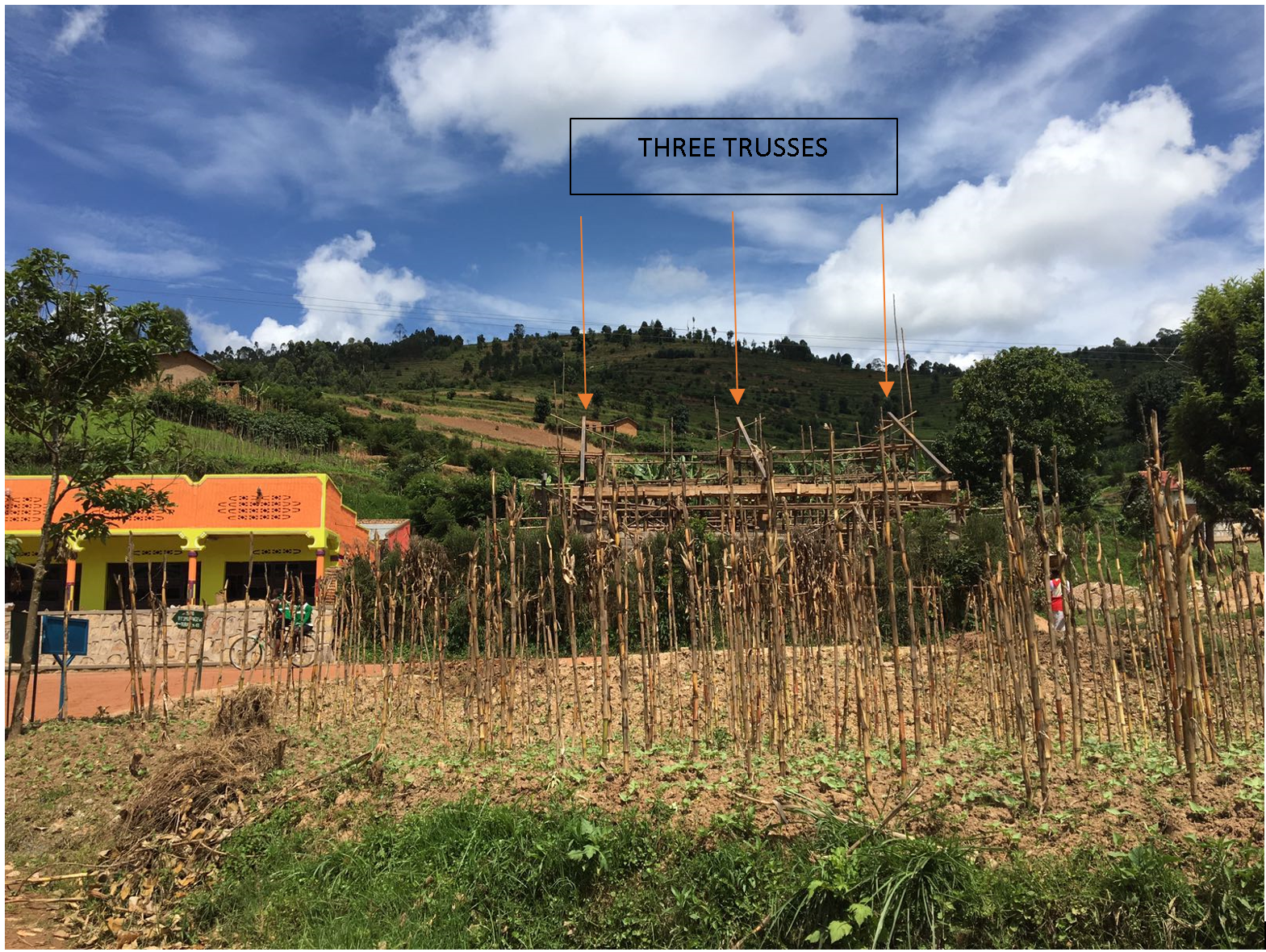 The sixth and final week of implementation in Rubaya came by in no time, at least for us – the EWB members sitting here in NY. For the six travelling members, it certainly has been a whirlwind as not only did they cross several time zones, they worked and dedicated themselves for two weeks in an immensely different work environment and had to get back to their jobs in NY right after. This probably has been exhausting for them but I am positive that each one of them has gained an experience they will cherish forever.

Now, before we see the final structure from the implementation trip, it is important for all of us to get an understanding of what happened during the final week which started with erecting the three trusses as shown below.

Evram and Alex started their final week by dealing with some scaffolding issues. Due to the height needed (~7m), it took a while to get trees from a nearby forest and adequately embed these trees into the ground. Once all of that got sorted out, the team kicked off with a productive day placing the base tubes in place and shimming in some locations to stabilize the truss. Once the three big trusses were positioned, the purlins were welded. For many who are like me and have no clue what purlins are, the definition I found online was ‘roof framing members that span parallel to the building eave, and support the roof decking or sheeting’.  Hopefully, the picture below is helpful in showing what they are. 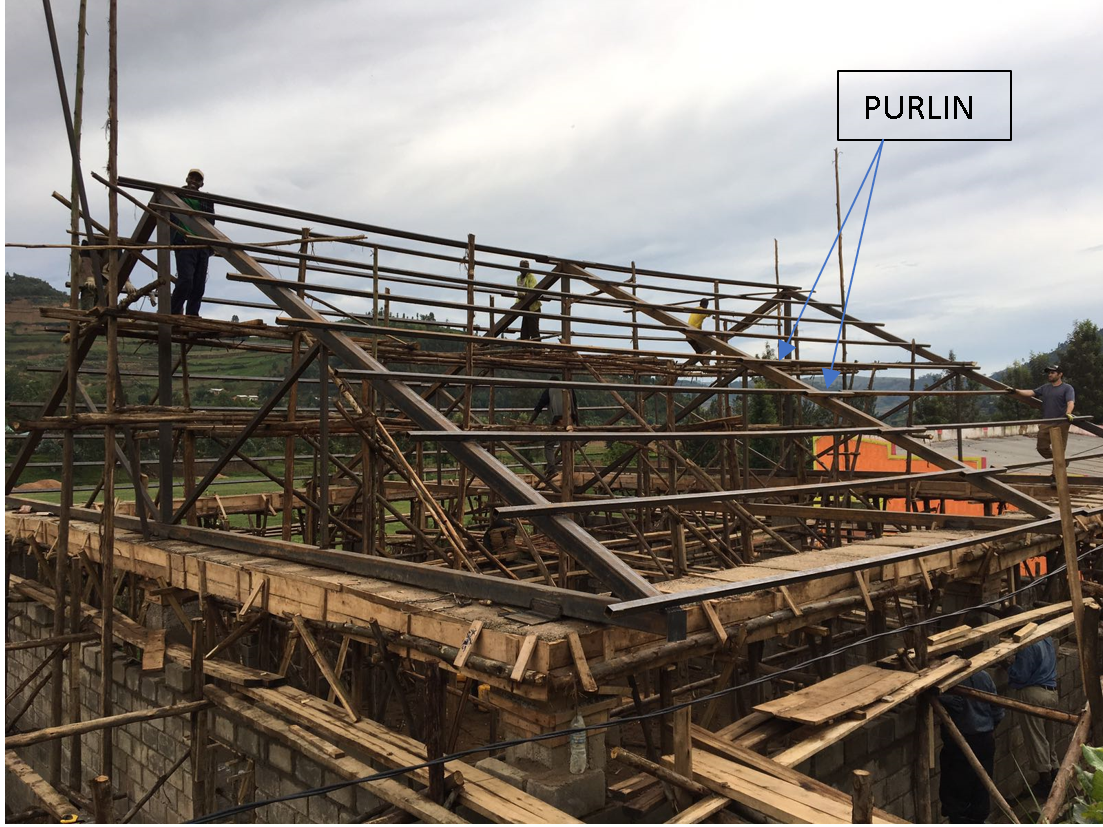 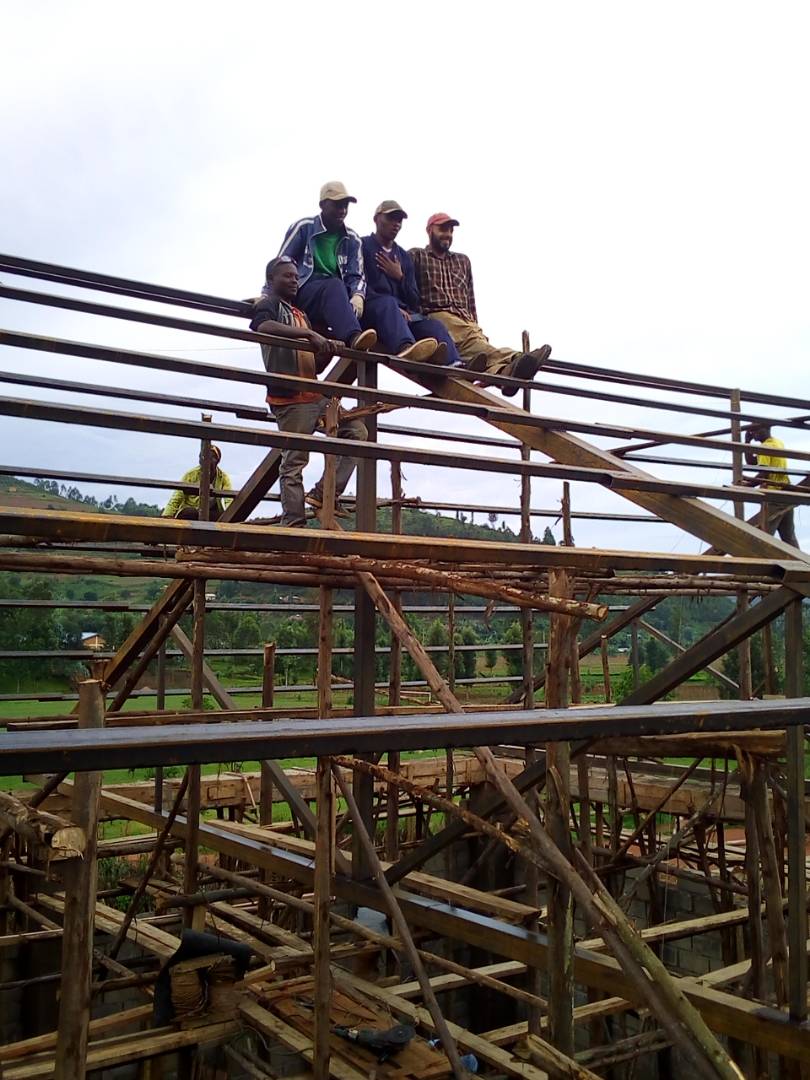 Getting back to the trip and what happened on ground; our team also completed a bottom ridge which was 60cm by 2 cm around all the interior walls of the building. The ridge is a design component present in Rubaya buildings and hence our team designed it on site and constructed it. This is one of the aspects that makes EWB projects unlike any other project! Yes, it can be offsetting to have a design element added at the last minute, but it can help us all learn how to respond to new situations and act quick.

Another suggestion made by Goodneighbors was a rain harvesting system which consist of a tank collecting rainwater from the roof of the new storage facility. It is a good example of futuristic thinking on their end and aligns really well with our chapter’s and EWB’s sustainability goals; however, they wanted a 5 cubic meter, i.e. ~1300 US gallon tank. There was space limitation on site and cost limitation as we had not included the cost of a tank when planning out the project. The idea although was hard to abandon, hence our team discussed this with community and provided a 3 cubic meter tank (~780 US gallon).

The team completed all the roofing and most of the vertical sliding, CMU wall, windows installation. and door fabrication. They also taught the workers the process of welding the angle bracing by showing them how to connect the angles to brace the top of CMU walls. This will be important as the workers will have to connect the angles without any on site supervision from EWB members.

After six weeks of dedicated work on site from six EWB volunteers, six interns and ~20 workers, the trip ended and so did the implementation trip for our EWB team. The storage facility still needs some finishing work; for which our team has prepared and trained the community members. Alex said that the picture below does not do justice to how tall this structure is, and I completely believe him. But we can only look at the picture for now, so here is the final reveal of the storage facility: 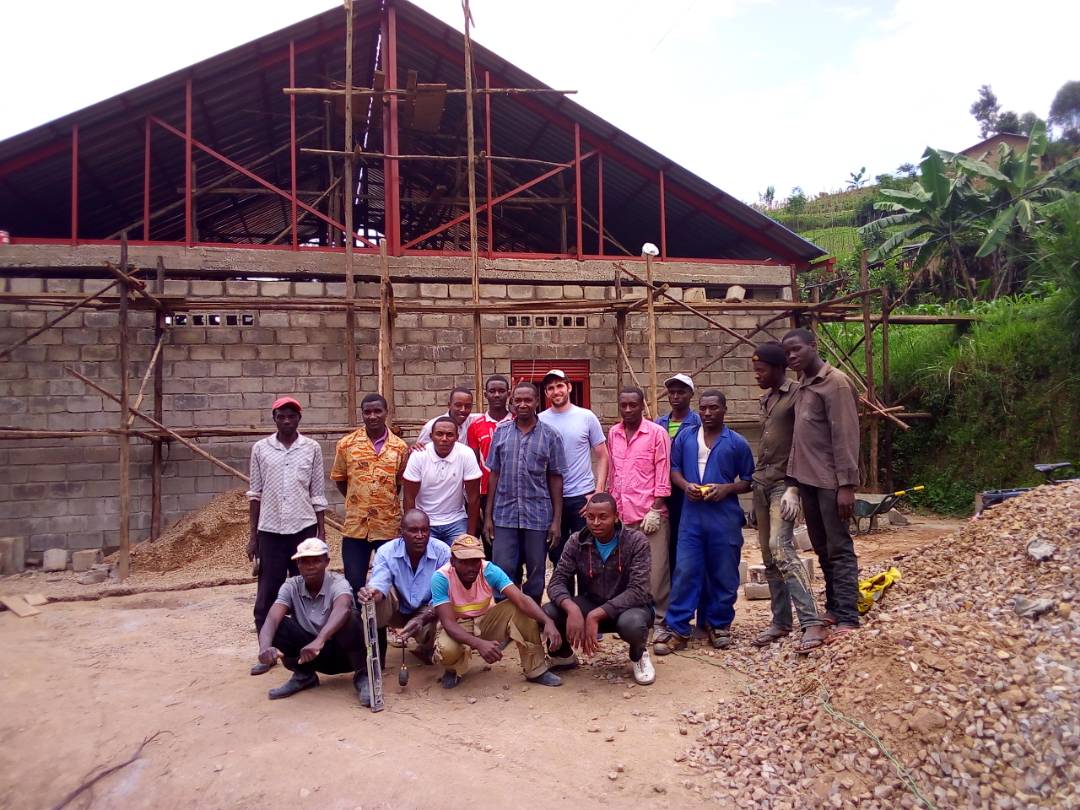