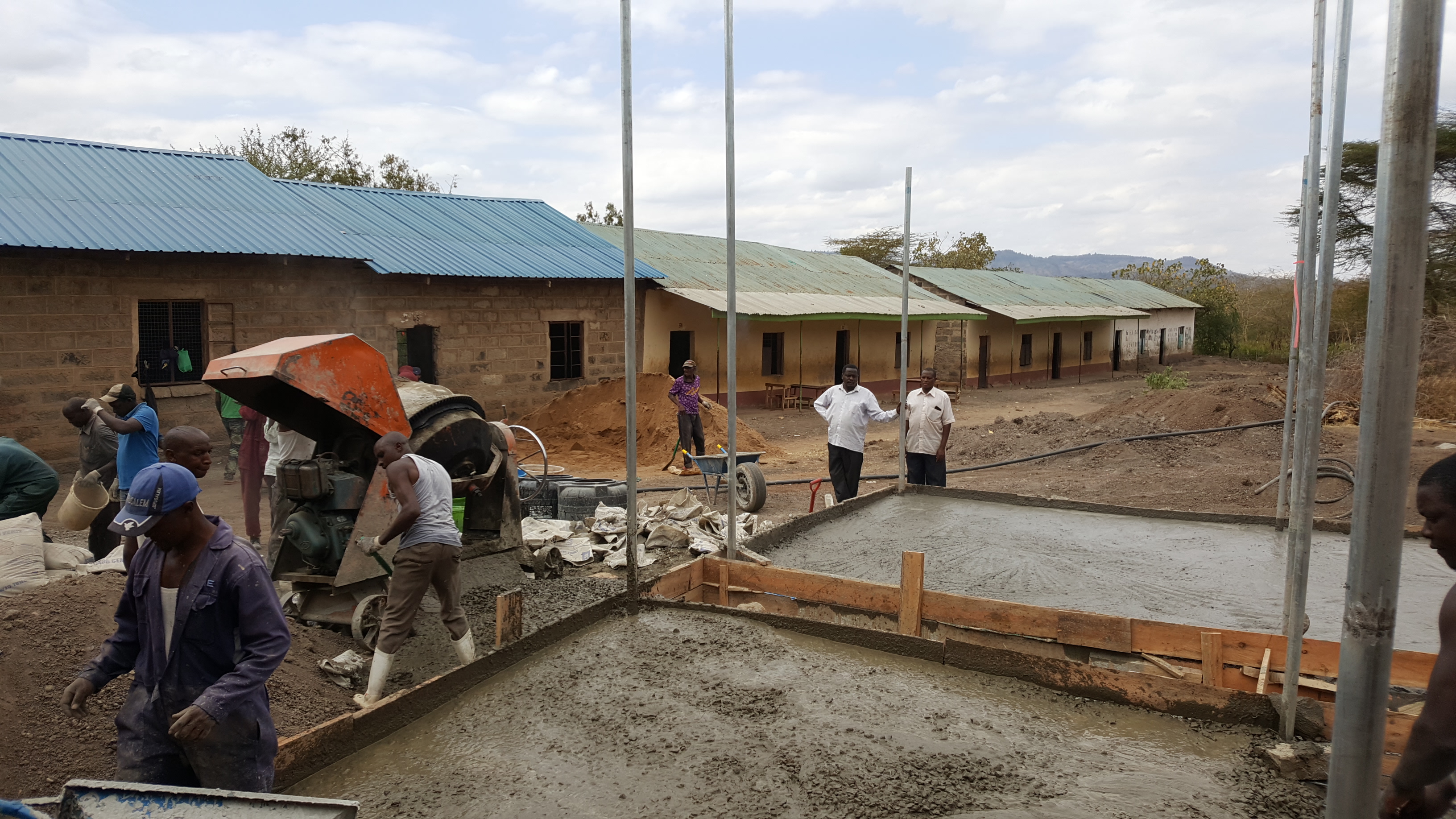 Construction has been going very well with incredible community support at every step.  At the time of this writing, the EWB-NY Civil Team has already completed their work and the Mechanical Team is wrapping up their part.  Here, the EWB-NY collaboration with Plumbers Without Borders pays off as the piping and gutters get professional attention.

Prior to the EWB-NY team arrival on August 4, parents cleared the site in preparation for construction. The EWB-NY Civil Team, consisting of Eric Lehan (Civil Engineer) and Kohinoor Mahi (Environmental Engineer), experienced a great deal of fanfare with much of the 800-student population showing up for a greeting ceremony – even though school is not in session for the month of August.  A barraza followed in which community leaders, speaking in Swahili, Kamba, and English, presented the objectives of the project and enlisted enthusiastic support from the Community.  One agenda item was to politely keep bystanders at a safe distance while the dirt flies.

The first order of EWB-NY business was to inspect the rainwater system installed at the Misuuni Primary School last year for any lessons learned.  Though it was working quite well, some adjustments to the first flush system were needed in addition to the roofing over the water tanks which was already identified as an objective for this implementation trip.  These are all nearly complete at the time of this writing.

Construction on water tanks started in earnest on Monday, August 5 with a local crew of two skilled construction foremen and seven laborers.  Labor costs were $10 per day for the skilled foremen and $8 per day for laborers.  While we are shocked at the low wages people make in rural Kenya, this is akin to Davis-Bacon wages for them.  A local welder and cement mixer were hired as well. By Saturday, August 10, all three concrete pads were placed, providing a secure foundation for six new 10,000-liter water tanks (two tanks per pad).  The hard work put in by the crew and the entire team put us ahead of a rather ambitious construction schedule.

The Mechanical Team consisting of Teja Jonnalagadda (Mechanical Engineer) and Jeff Morgan, (Master Plumber), arrived on site Sunday, August 11 and set immediately to work updating their materials list.  With a quick trip 70 kilometers back to Nairobi, they were able to purchase nearly all the plumbing and gutters and have them on site Wednesday, August 14.

We cannot fail to mention the amazing support of the Misuuni Development Self Help Group (MDSHG), who handled endless logistical issues and hosted the EWB-NY teams.  Mr. Nixon Kioko, a Kenyan Mechanical Engineer (graduate of the University of Nairobi) and Misuuni resident, assisted the Mechanical Team greatly with his inside knowledge and technical skill.

Nixon had to travel from a job site in Kampala, Uganda some 7 hours by bus to Nairobi where he was to continue on to Misuuni by car.  Unfortunately, the public bus he was riding in broke down before reaching the Kenyan border.  This left all the passengers and Nixon stranded for several hours in rural Uganda waiting for a replacement bus which never arrived.  After a while, Nixon was able to evaluate the mechanical problem with the bus and fix it.  The bus and passengers continued on the journey to Nairobi.  Nixon received a free ticket from the bus company and several offers of marriage along the way.  We can’t loose with support like this and with the support of everyone who believed in this project.